We invite applications for Production Editors and Poetry Editors until the positions are filled.

We will begin scheduling interviews on December 16, 2022.

PRODUCTION EDITORS: As an integral part of the managing editor’s office, production editors are responsible for layout and formatting of all content prior to posting at MAYDAY. In addition to an interest in literary publishing, strong applicants might also have experience with digital journalism, publishing, and/or proofing or editing copy. MAYDAY is published on WordPress, so experience with this platform will be helpful, but it’s not prohibitively difficult to learn, either. We provide staff training and ongoing support. Familiarity with the Chicago Manual of Style will also be helpful, though it is also not an immediate requirement.

POETRY EDITORS: In addition to reading submissions and selecting work for publication, poetry editors will be encouraged to solicit work for the magazine and help develop various feature series and ongoing projects in collaboration with other editors on staff. Ideal candidates for the poetry editor positions may or may not have an educational background in writing or literary studies, but should have experience publishing their own work and/or editing the work of others.

Mayday Magazine has selected the top 16 entries for their March Madness Flash Fiction Contest, and starting March 14, popular vote will whittle the list down to the Final Four prize winners whose works will be published. Visit the Mayday Magazine website for more information about this as well as to read some of the newest submissions to their online magazine from contributors Will Russo, Abigail Chang, C. Kubasta, Lucian Mattison, and works by Cho Ji Hoon translated from Korean by Sekyo Nam Haines.

magazine-news-MAYDAYEditorialPositionsAfter a year of rigorous expansion, online literary magazine MAYDAY seeks to share its updated format and expanded vision with new audiences. To do this, they are expanding and diversifying their editorial staff to include new intellectual and cultural backgrounds, experiences, perspectives, and points of view.

MAYDAY is a volunteer organization composed entirely of unpaid volunteers who can work anywhere in the world as long as there is an internet connection.

Take a look at their redesigned site and content and consider joining their team. View the PDF for more information.

On June 17, online literary magazine MAYDAY Magazine announced the results of their 2021 MAYDAY Prizes in poetry and fiction. The winners each received $1,000 and broadsides of their work will be available soon.

2021 MAYDAY Poetry Prize was judged by Jacques Rancourt. He selected “Garçon,” by A. Shaikh as the winner.

Finalists included “Southern Thundering” by Gustav Hibbett; “What My Mother Never Told Me” by Michael Meyerhofer; “During the Pandemic, I Watch Caddyshack Again & Again” by  Christina Olson; and “The Cousin’s Secret” by Lindsay Wilson.

MAYDAY also has a listing on NewPages, so don’t forget to swing by there, too.

After more than ten years of publishing literary fiction, poetry, nonfiction, and works in translation for an international readership, MAYDAY Magazine is relaunching with a new format and expanded editorial vision.

To help shape the online magazine’s new identity, MAYDAY is expanding and diversifying its editorial staff to include new backgrounds, experiences, perspectives, and points of view. Editors at MAYDAY Magazine work remotely and can live anywhere there’s an internet connection.

We invite applications to be submitted by July 31, 2020 for the following editorial positions:

Please visit our complete Call for Applications to learn more. 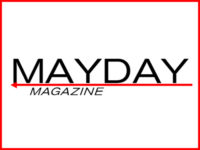 Mayday Magazine‘s website has a had a makeover! The new set-up has different genres in the header so readers can choose their favorites there, and the homepage displays new, featured work. The newly designed site looks modern and is easy to navigate. Who doesn’t like to experience some change once in awhile? Check it out for yourself and sign up for the magazines newsletter while you’re there for even more updates from Mayday.