In addition to celebrating their 10th Anniversary, Cleaver Issue 40 features selections from the first annual Cleaver Flash Competition. Judge Meg Pokrass comments, “It was only after rereading the stories for a number of weeks that my favorites became clear. Ultimately the winners were the ones that inexplicably moved me emotionally above everything else, and that I kept re-engaging with, trying to figure out how the writer worked their magic. It became a matter of recognizing that certain pieces had chosen me, not the other way around.”

Always free to all readers with no paywall, the newest issue of Cleaver: Philadelphia’s International Literary Magazine is waiting for you! This issue features Stories by Madeleine Gavaler, Amy Savage, Suphil Lee Park, Andrew Vincenzo Lorenzen, Hannah Garner, Candice Morrow, and Kim Magowan; Poems by John Schneider, Alison Lubar, Lydia Downey, Varun Shetty, and Michelle Bitting; Flash by Josh Krigman, Emma Brankin, Dan Shields, Jeff Friedman, Alison Sanders, and Devon Raymond; Creative Nonfiction by Phil Keeling, Emily Parzybok, and Beth Kephart. Among these contributors are those Cleaver recognizes as “Emerging Artists” who are under 30 and “still in the early stages of their careers.” Cleaver also regularly offers online generative workshops for writers to find community and grow their craft, in both synchronous and asynchronous formats. Visit their website for more information.

Cleaver literary magazine may be based out of Philadelphia, but in keeping with their “international” status, their online workshops are open to all with internet access using both Zoom and Canvas platforms in synchronous and asynchronous modalities. Upcoming workshops include:

TELL ME WHAT YOU EAT, And I Will Tell You What You Are
Writing About Food and Ourselves taught by Kristen Martin

These all take place online. Workshops are capped at twelve registrants.

Learn more about the upcoming workshops here and register through Submittable.

The Fall 2021 issue of Cleaver features creative nonfiction by E. A. Farrow and Tricia Park; fiction by Sarah Schiff, Frankie McMillan, Peter Amos, and more; a visual narrative by Emily Steinberg; flash by Suman Mallick, Alex Juffer, Sarah Freligh, Kelly Gray, Gay Degani, Chelsey Clammer, and others; and poetry by Sara Mae, John Cullen, Danny Cooper, Melody Wilson, Tingyu Liu, and Tom Laichas. See what else you can find in this issue at the Mag Stand. 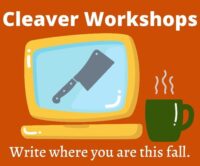 Online classes with Cleaver Magazine begin early next month. Stay cozy at home as the weather gets cooler while you strengthen your writing skills.

This season, workshops include “Telling Stories of Disability and Illness” taught by Michelle Hoppe, “Voice Lessons: Identifying and Creating Perspective in Poetry” taught by Claire Oleson, “The Writing Lab: Playful Experiments to Unstuck Your Writing” taught by Tricia Park, and plenty more.

You can find additional information on how to register and what to expect from the available workshop at Cleaver‘s website.

Looking to attend writing workshops this winter? Cleaver Magazine has you covered. With courses on Zoom and Canvas held throughout the coming weeks, they have plenty of options for your workshop needs.

Upcoming workshops include “Weekend Writing” with Andrea Caswell; “The Art of the Scene” for creative and nonfiction, taught by Lisa Borders; “TRANS (Is Not An Abbreviation),” taught by Claire Rudy Foster; and more.

You can find additional information on how to register and what to expect from your workshop at Cleaver‘s website.

In this issue of Cleaver, find three collaborations: “Reparations Wine Label” with text and concept by J’nai Gaither and art by Phoebe Funderburg-Moore; “The Esperanza Project” with music by Richard Casimir, video editing by Michael Casimir, and a poem by Herman Beavers; and “Terra in Flux” with poetry by Mark Danowsky and photography by John Singletary.

Take a Walk “In the Woods” with Emily Steinberg

Emily Steinberg takes a walk “In the Woods” with her dog, Gus, in her visual narrative found in the Midsummer 2020 issue of Cleaver. During her walk, she focuses on Gus and her surroundings, reflecting on the way the real world and its real problems seem far away. In the woods, “All human makings disappear . . .” and there is only the sounds of the wind in the trees and the creek and Gus’s paws around her. This moment doesn’t last forever, though. She has to cross the threshold back into the real world where everything “comes sweeping back. Crowding my brain. Not letting me breathe.” But for a moment there is peace.

This short visual narrative gives readers a moment of peace as well as we soak in the quiet moment of respite along with Steinberg. Each panel features only Gus, a fluffy scribble of a dog padding through the woods, a dog always good comfort when it’s needed. The piece works as a good reminder to take a moment to find calm and quiet in the midst of the tragedies and turmoil swirling around us. By taking these moments, we’re able to recharge as we head back into the real world to face everything once more.

This issue of Cleaver Magazine features art by Madeline Rile Smith, a visual narrative by Emily Steinberg, and an essay on the art of Jan Powell by Melanie Carden. Also in this issue: short stories by Reilly Joret, Elaine Crauder, Melissa Brook, and Marion Peters Denard; flash by Susan Tacent, Brenna Womer, Michelle Ephraim, Leonard Kress, and others; and poetry by Roy Bentley, Stella Hayes, and more.