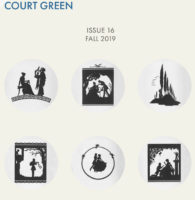 The thumbnails of the Fall 2019 of Court Green mostly show silhouetted scenes of courtship—men playing musical instruments or bowing on knees before women, scenes of dancing and kissing. In her two poems, Maureen Thorson writes of a different sort of relationships and intimacy, instead focusing on family. END_OF_DOCUMENT_TOKEN_TO_BE_REPLACED

Online literary magazine Court Green is open to submissions through June 1. They do charge a small fee and accept submissions only via Submittable. Learn more…