The road a poet travels is often littered with unrealized fragments, half-realized drafts, and unfinished poems that found their ways into a magazine but never earned their way into a book. If a poet is lucky, a few such left-behinds might be “rescued,” released into their true form thanks to abilities that have ripened over many years of practice. In Under Sleep’s New Moon, Joseph Hutchison (Colorado Poet Laureate, 2014-2019) offers a range of such poems, all rescued from twenty years of writing between 1970-1990. The poems in this new/old collection are by turns personal and public, surreal and naturalistic, musical and plain-spoken. But all explore the liminal regions we live in every day, too often unconscious of what we’re finding there. What this poet found there he has lifted into new configurations, where at last the poems can speak for themselves.

In Linda Lerner’s Taking the F Train, a New York City poet rides the F Train through the final years of the 20th century into the 21st; both gentrification and technology are rapidly transforming life as she has known it. Her old haunts – cafés, bookstores, diners, are being replaced by luxury co-ops. There are also losses due to illness and aging – those of others as well her own. And it’s not ok, she cries out! At the same time, for every push forward into the future, she’s witnessing an opposite push back into the past by the so-called leader of the free world. Nothing makes sense to her anymore. There’s only what can be salvaged by art…the act of creation.

Ryan Quinn Flanagan’s Minotaur Snow is an urban menagerie of very human poems. Difficult situations, individual foibles, that unescapable rush of the modern city; the sights and sounds and smells and touch, all told with great humor and at times, compassion. Flanagan peoples the landscape in such a way that his experiences become your experiences, his revelations and perspectives a busy populous of comings and goings all captured in a language that is both highly accessible and littered with odd notions or turns of phrase. Minotaur Snow above all else is a book that captures what is timeless to our shared experience, but with a fierce individuality that washes over everything like a heavy falling snow.

Smoke and Mirrors by Donna Dallas spills torment, agony, small miracles and a blind lust for life no matter what the cost. When we look closely and peel back the facade of perfect skirts, soft skin and angelic smiles, we see. We see the ugly, the truth, and everything in between. I am Smoke and Mirrors every day. I am pretty blouse and sweet face pining over which shade of red lipstick is the right one for me…while the real me dies inside. Maybe that defines all of us to some extent. Perhaps we fear to be uncovered or peeled back and have our faults laid out in proud display. Every mishap, every event, every peeling and uncovering has evolved into the Smoke and Mirrors I have laid out on these pages. I’m a successful lie, I do it well. I’m itching to be opened up.

How Much? New and Selected Poems
Poetry by Jerome Sala
NYQ Books, November 2022

How Much? New and Selected Poems by Jerome Sala offers a panoramic view of a poet whose work has often been a cult-pleasure until now. Spanning Sala’s early years as a punk performance poet in Chicago to his career as a copywriter/Creative Director in New York City, these poems offer satiric insights from the “belly of the beast” of commercial and pop culture. Sala’s books of poetry include cult classics such as I Am Not a Juvenile Delinquent, The Trip, Raw Deal, Look Slimmer Instantly, Prom Night (a collaboration with artist Tamara Gonzales), The Cheapskates, and Corporations Are People, Too! His poetry and criticism have appeared widely. Before moving to New York City in the 80s, Sala and his spouse, poet Elaine Equi, did numerous readings together, helping to create Chicago’s lively performance poetry scene. He has a PhD in American Studies from New York University. 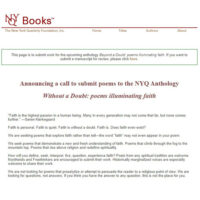 Deadline: February 2, 2021
NYQ Books is seeking submissions for an anthology to be titled Without a Doubt: poems illuminating faith. Submissions will remain open until February 2, 2021, but may close early should the anthology fill. We are seeking poems that explore faith rather than tell. We seek poems that demonstrate a new and fresh understanding of faith. Poems that rise above religion and redefine spirituality. Poets from any spiritual tradition are welcome. Nontheists and Freethinkers are encouraged to submit. Historically marginalized voices are especially welcome. We are not looking for poems that proselytize. Please see our webpage for complete guidelines.