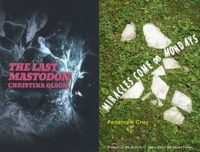 The Cupped Field was selected by Marilyn Nelson. O’Connor, according to Nelson, “knows that the mind is complex, a map of many countries [ . . . ],” as she reminds “us of the anniversaries we might celebrate of the days when those we love did not die.”

The Last Mastodon explores the nature of “history, assembly, and ownership,” and was inspired by the time Olson spent among paleontologists while she served as poet-in-residence for “The Valley of the Mastodons” at the Western Science Center in Hemet, CA.

In February, readers can look forward to Miracles Come on Mondays by Penelope Cray, winner of the Robert C. Jones Prize for Short Prose, and Louder Birds by Angela Voras-Hills, winner of the Lena-Miles Wever Todd Prize for Poetry. Both are published by Pleiades Press.

Miracles Come on Mondays was selected by Kazim Ali who says of his selection: “These dark fractured fables tell stories of strange texture; stories about characters trying to find their way amid currents both small and large in a world in which personal and spiritual intimacy feel dangerously compromised. They are philosophical, funny, and frank.”

Traci Brimhall selected Louder Birds as the contest winner, calling the collection, “[A]stonishing. Lines from these poems kept rising in me days after I read them [ . . . ].”

Finally, University of New Mexico Press has just published Try to Get Lost: Essays on Travel and Place by Joan Frank, a River Teeth Literary Nonfiction Prize Winner. In this collection, Frank “exploreshwo the places we have lived, visited, imagined, or longed for shape not only how we view ourselves but also how we understand [ . . . ] the world.”

See for yourself why these books brought home the prize and keep an eye open for more award-winning books scheduled to be published later this spring.