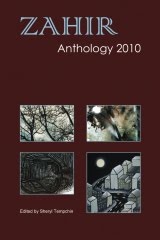 Zahir: A Journal of Speculative Fiction is trying out a creative approach to publishing. The magazine had appeared in print three times a year from 2000-2009, but in 2010, moved to publishing quarterly online. However, the full content of the four online issues is now available in print as an anthology and can be ordered through Creative Space and Amazon.