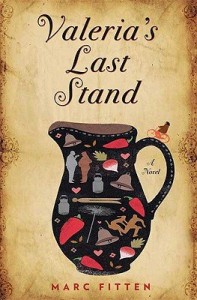 Here’s the problem when you have a friend who writes a book and gives you a copy, then wants to know what you think about it. What if you think it’s absolute crap? Well, long-time friend of NewPages, Marc Fitten, would know that if I thought it was crap, I would tell him so, with lots of facial gestures and dramatic delivery of, “Oh my god, this is the worst thing I’ve ever read.” And that would only be the beginning.

As it turns out, Marc’s first novel, Valeria’s Last Stand, out now from Bloomsbury, is not crap (how’s that for a book cover blurb?).

However, fearing it would be, I did put off reading it for a while, which is not what I would recommend to anyone else. In fact, once I started reading it, fearful with every turn of the page that it would disappoint in some way, I have to admit, I became completely absorbed in the story. I found the characters entering my daily thoughts and I was eager to get back to reading, to find out what was going to happen next.

Likened to a fable or fairy tale, I would take this novel and its characters to another level. This is mythology and archetypes vividly developed with contemporary twists. The main character, Valeria, is the town matriarch/baba yaga. She is a 68-year-old spinster living in a fictional, off-the-map small town (Zivatar) in post-Communist Hungary. Though ostracized in some ways of the baba-yaga, at the same time, she yields great power over the community, keeping the daily market standards high under her scornful eye, as in this exchange:

Valeria then sniffed the vegetable in question and shook her head.
“How old is this?”
The vendor was speechless.
“Why does it smell like urine?”
The vendor shrugged.
“Are you letting your cat pee on these? You should be imprisoned,” Valeria said, and tugged at her keys.

Her ever present maternal keys, the symbols of her meager power and control over every cupboard in her home, soon fall to the wayside along with her self-control, as she finds herself attracted to the equally aged town potter. Not to give away too much, Valeria and the potter have a lovely tryst, which is problematic for 58-year-old Ibolya, the Aphrodite bar owner who has her own flocculating relationship with the potter. Add to the mix a Loki chimney sweep whose entrance into the village creates greater havoc than luck, and a Zeus of a mayor who sees the town and the people as his playthings while (of course) screwing around on his trophy wife. It’s delicious. All absolutely delicious. And that’s just a loosely related character map. There’s so much more.

Most stunning to me in the book is the third person omniscient narration that fairly reveals the complexity of thought of each character, not necessarily in segments, but interwoven throughout the story. As carefully as we read and watch the potter build prototype after prototype of his creations for Valeria (first an ewer, then a pair of vases), so too does the story blend and mix the clay of the characters through each new development of their stories.

And, no, the potter has no name, nor does his male apprentice, nor the male chimney sweep, nor the male mayor character (well, other than Mayor, at times). Which is not to say this isn’t a man’s story just as much as it is a woman’s story. In that, Fitten has created a wonderful blend, and played both genders seamlessly. It reminds me of the line from the movie As Good As It Gets, when the woman asks Jack Nickolson’s character, “How do you write women so well?” Only, instead of his smarmy response, I can say that Fitten writes both men and women well, tapping into that which makes them tender as well as tough, each with their strength of independence, and each with their need for one another, right down to the most resistant of them.

Shifts and changes in relationships and aging are all a part of this narrative. Considered the first in a trilogy of books focused on strong female characters, our protagonist in this story is 68, but no where near retirement from that which brings her pleasure in life. In fact, Valeria is just beginning a very new kind of awakening for herself. At 58, Ibolya sees her days of sexual power coming to an end: “no matter how short her skirt was or how far over she leaned, the men she enticed were now all older than she was. Their handsome grandsons smiled and flirted, but she could see in their eyes that there was no real interest in there.” To solve her dilemma, and keep the men drinking and spending money, she hires young Zsofi, who is in love with the potter’s somewhat clueless and somewhat resistant apprentice. Theirs is the youngest relationship in the book, and equally as intertwined with the others.

In addition to creating the story of the daily lives of these characters as they move forward, Fitten has also done well to include numerous backstories in the narrative. That of Valeria’s having to grow up quickly and take care of herself, of the potter’s care for his dying wife, of Ilboyla’s being left alone to fend for herself and using her sexual power to do so, of the mayor’s long list of failed attempts to bring capitalism to the town that time forgot, and of the chimney sweep’s disgust for his own profession, as well as, of all things, an intriguing backstory of the bicycle he uses as his transportation. These backstories do not disrupt nor drag on the flow of the story as they are carefully crafted into the narrative and so concisely and specifically developed in the intricacy of their detail as to feel necessary and integral.

Thematically this is an ambitious novel: place, change, progress, power, love, lust, ambition, aging, relationships, and how much more? Yet, I never felt in reading it that there was any lack of control or chaos among these. Each seems to come forth through the myriad characters and storylines that create the narrative in whole. It was only in finishing the book did I feel a sudden, overwhelming swirl of all it had contained. Not a negative outcome for me as a reader, and actually, one which I prefer, since it keeps me thinking about the book long after I have finished reading it. As well as recommending it to others. Highly. And anxiously awaiting the next in the trilogy.