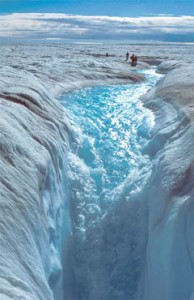 Glacial Acceleration: A Sea of Troubles
Why what’s happening in Greenland matters now
By Paul Brown
From E-Magzine
December 14, 2007

“It is hard to shock journalists and at the same time leave them in awe of the power of nature. A group returning from a helicopter trip flying over, then landing on, the Greenland ice cap at the time of maximum ice melt last month were shaken. One shrugged and said, ‘It is too late already.’

“What they were all talking about was the moulins, not one moulin but hundreds, possibly thousands. “Moulin” is a word I had only just become familiar with. It is the name for a giant hole in a glacier through which millions of gallons of melt water cascade through to the rock below. The water has the effect of lubricating the glaciers so they move at three times the rate that they did previously…” [read the rest and see more images here]