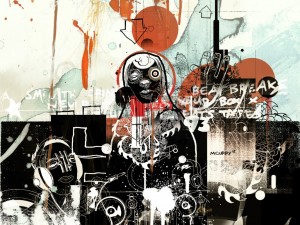 Specter Literary Magazine, a monthly online magazine, just put out its first themed issue—“Hip-Hop Issue: Side A & Side B”—guest edited by Rion Amilcar Scott. The issue features poetry, prose, and art focused on hip-hop and even includes an accompanying playlist for both sides A and B.

Amilcar Scott says, “Rap as a musical form shares with literature an intense focus on words. All the authors here delight in the obsessive wordplay of your local emcee . . . The playlists for Side A and Side B are how the issue sounds to me. These are the songs suggested to me by the rhythms of the words and by them themes explored in the issue. Pump these playlists as you read. Shit, make your own playlist based on how the words in this issue hit you.

“So, here it is, Specter Magazine’s Hip-Hop Issue: Side A & Side B, pure heat, pure funk. I hope you enjoy the pieces as much as I enjoyed assembling them. I hope you throw your hands in the air and wave them as if you no longer care. At least many will echo with you like your saddest hip-hop memory or your favorite rap song.”