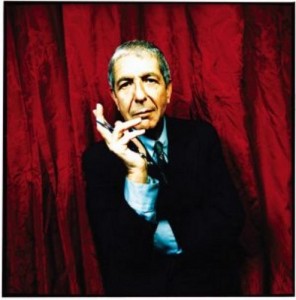 And to a remarkable extent, Leonard Cohen is succeeding. Sarah Hampson had a rare opportunity to spend an afternoon with the famed singer and poet. He’s got the wisdom of age but he’s still the essence of cool—the perfect reflection of his years of Zen.

[. . .] It is often said that Cohen is hard to define. There’s Cohen, the son of a prominent Montreal clothier and the grandson of a Jewish scholar. Cohen, the law-school dropout. Cohen, the novelist, the poet, the songwriter. Cohen, the sexual bad boy who becomes a monk.

But he disagrees. “I always felt it was of one piece. I never felt I was going off on a tangent. Mainly because I think we develop images of ourselves quite early on, and certainly one of the images I had of myself came from reading Chinese poetry at a very young age. There was a kind of solitary figure in some of those poems by Li Po and Tu Fu. A monk sitting by a stream. There was a notion of solitude, a notion of deep appreciation for personal relationships, friendships, not just love, not just sensual or erotic or the love of a man or a woman, but a deep longing to experience and to describe friendship and loss and the consequences of distance. So those images in those poems had their effect, and thirty years later, I found myself in robes and a shaved head sitting in a meditation hall. It just seemed completely natural,” he says in a quiet manner [. . .]

Read the rest on Shambhala Sun.