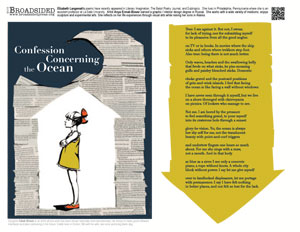 September’s Broadsided Press Collaboration, “Confession Concerning the Ocean” features a poem by Elizabeth Langemak, art by Anya Ermak-Bower, and design by Caleb Brown. This is the first time Broadsided has included a “guest designer” in the mix; previous broadsides had been designed by Broadsided Founder Elizabeth Bradfield.