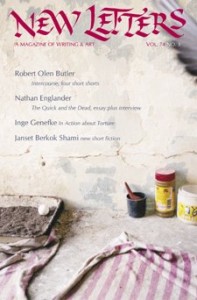 This current issue of New Letters (74.3, 2008) follows the magazine’s recent National Magazine Award for the essay “I Am Joe’s Prostate” by Thomas E. Kennedy (73.4, 2007). In his editor’s note, “Time and the Fabric of Immensity,” Robert Stewart reflects on the awards night and give further consideration to comments he made in his acceptance speech. “What did it mean, then, for me to say in my acceptance ‘speech’ to the audience at Lincoln Center on May 1st, that the mission of a literary magazine differs in quality from that of many other, even other fine, magazines?”

Considering the participants in the audience, many of them “great editors of our time,” Stewart questions himself: “Who did I think I was?” He goes on to discuss the difficulty readers as well as even he had with the very essay that won the award that evening, questioning its ‘literary-ness’ and further the very definition of ‘literary.’

The burden of creating this definition not only rests on editors, but readers as well – perhaps not accepting at first what they read, but then coming to find a place for it in their literary experience. Stewart bookends his editorial with Don Quixote: “Good, literary writing trumps everything. It carries us along and expands our scope. We readers merely need to have courage equal to that required to write it. Didn’t we laugh at Don Quixote, also? Yes. His story is terrifying and hilarious. It’s literary.”