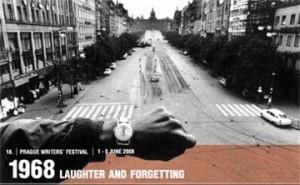 In 2008, the Prague Writers’ Festival celebrates its eighteenth anniversary. The Festival is one of Europe’s leading cultural events, through its unique mix of world-class authors, international media coverage and live broadcasts on the internet. The Festival is co-sponsored by the City of Prague and the Guardian, which presents the Festival through its book pages.

The Festival dates from Keats House, London 1980, when with “Index on Censorship” through the Helsinki Accords we brought vital authors from Central and Eastern Europe to the attention of the public. As Herzen noted: “Fish were born to fly, yet everywhere they swim.” Fortunately in 1991, we could fly east and bring outstanding authors to Prague. In 1997, the Festival became a Czech cultural foundation.