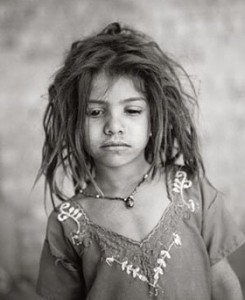 Fazal Sheikh is an artist-activist who uses photography to create a sustained portrait of different communities around the world, addressing their beliefs and traditions, as well as their political and economic problems. By establishing a context of respect and understanding, his photographs demand we learn more about the people in them and about the circumstances in which they live.

I recommend you start with these, and look at the other related projects linked from there.

“For five hundred years the holy city of Vrindavan in northern India has been a haven for India’s dispossessed widows. Cast out by their families and condemned by strict marital laws, which deny them legal, economic, and in extreme case their human rights, they have made their way to the city to worship at its temples and live in its ashrams, surviving on charitable hand-outs or begging on the streets. In Vrindavan they worship the young god Krishna, who invades their dreams, helping them to cast off memories from their past life and prepare for a new and better life to come. Their ultimate dream is to reach moksha—heaven—where they will find freedom from the cycle of death and rebirth and live surrounded by their gods forever. Fazal Sheikh’s landscape photographs capture the meditative mood of the city and his portraits of the widows convey their sense of acceptance of life nearing its end and a longing for what is to come.”

As part of the ideology behind the International Human Rights Series and in order to bring the issues contained within Moksha to an international audience, it may be read in its entirety on-line in English, Hindi or Bengali.

“While working on the book Moksha, Sheikh went to Vrindavan, one of India’s holy cities, where Hindu widows come to live out their last years. It was while listening to their stories that he began to comprehend the full extent to which women in India are the victims of religious and cultural codes that reduce many of them to little more than child-rearing servants. He returned to India to find out more from young women growing up in a society that, whatever economic advances it may boast, is still widely prejudiced against them. Ladli—which in Hindi means ‘beloved daughter’—is the result.”