From The Stranger: John Marshall, the owner of Open Books up in Wallingford (WA), informs us that local poet William Witherup died yesterday of leukemia. Here is what Marshall has to say about him: “Bill was, to various degrees, very sweet and very crusty. He spent much of his life, politically and through poetry, focused on the plight of Downwinders, of which he was one—people who grew up and lived downwind of the Hanford Nuclear Reservation.” 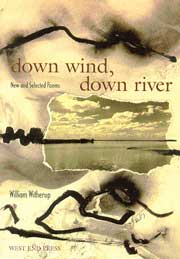 From West End Press: Bill Witherup was born in 1935. He grew up in eastern Washington, around Hanford from the time his father took a job there.

After graduating from the University of Washington, he moved to San Francisco in 1960, later dividing his time among rural retreats near Monterey and Big Sur in California and a ranch outside Santa Fe, New Mexico.

His poetry darkened following the death of his father in 1983. While Witherup has endured periods of breakdown and hospitalization during his adult life, his dedication to poetry has remained unrelenting.