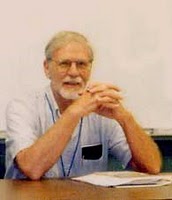 Ronald (Ron) Charles Offen, 79, of Glenview, Illinois, died on August 9th in Glenview. The cause of death was cancer.

Ron was born October 2, 1930 in Chicago to Charles Offen and Ellen Shirreffs Offen. He graduated from Austin High School, received an A.A. from Wright College and an M.A. in English Language and Literature from the University of Chicago. In the 1970s and 1980s he lived in Southern California and was delighted to return to the Chicago area in 2001.

Ron held many jobs, from taxi driver to insurance investigator to middle school library assistant. But the force that gave his life meaning was always the written word; he was an author, a poet, playwright, editor, and theater producer.

In 1989, after a bout with cancer, he thought about how important poetry had been to him and how much it had given him. To give something back to poetry and poets, he started the magazine Free Lunch, with the commitment to give all serious poets in the U.S. a free subscription and also to comment on all work submitted to him. Free Lunch has published many of the best-known contemporary American poets. In 2009, due to his illness, publication of the magazine ceased.

Ron loved his wife, his children, his many friends, poetry, trees, the color orange, playing the trumpet and the piano, cookies, contemporary art and architecture, WFMT, caring for his collection of house plants, books, turtles, jazz, Bach and Chopin, swimming, the Midwest, and evenings at home.

There will no funeral services. A memorial celebration will be scheduled.