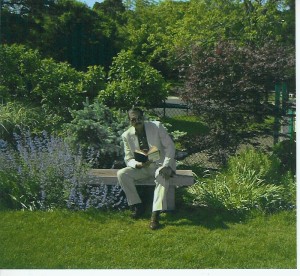 Author Lindsay Patterson, who wrote several books, anthologized the poems, plays and films of Afro-American artists and taught at a wide range of major colleges and universities (including Hunter and Queens in New York), died Wednesday, August 26 after a six-month battle with cancer. Born in Bastrop, Morehouse Parish, Louisiana, on July 22, 1934, Lindsay was the son of Dr. James and Adele Patterson. He graduated from high school in Winston-Salem, N.C. and received his B.A. in English from Virginia State University before serving in the US Army, where he was a reporter for Stars and Stripes. He is survived by his brother and sister-in-law, James and Mildred Patterson, Jr. of Kernersville, N.C. and his nephews, James III and Roger Lindsay (who was named for his uncle).

He arrived in New York in 1962 to be a writer. And he was indeed a major writer. In his four decades in New York, he was a regular contributor to the New York Times, as well as its book review, Essence Magazine, Newsday, Playbill, ANPI and dozens of other newspapers, magazine and wire services. He hosted an interview program on WRVR-FM and on WPIX-TV for several years, interviewing the major movers, shakers and artists within the black and white theatre and cultural worlds, leading to long-term friendships with Ossie Davis, Ruby Dee and many others. His papers were assembled to form The Lindsay Patterson Collection in Boston University’s Howard Gottlieb Archival Research Center.

According to Lindsay’s friend, fellow writer Pearl Duncan, he was obsessed with American literature. As he lay in the hospital, post-op, Ms. Duncan read to him from Hemingway’s “A Moveable Feast.” “Before I could read the words, Lindsay was reciting them. He knew that book by heart.”

James Patterson described his younger (by ten months) brother as a voracious reader. “He just loved to read. Lindsay also always had an inquisitive mind; he just wanted to know how things worked.” James added, “Several years ago, Lindsay embarked on an investigation into the family ancestry, devoting hours and hours in researching our background.”

Lindsay’s sister-in-law, Mildred Patterson, stressed that Lindsay was an extremely talented person. Very caring, she said. But also very private with a passion for writing and the arts.

A Rock against the Wind; African-American Poems and Letters of Love and Passion, edited by Lindsay Patterson with a forward by Ruby Dee

Black Theater, A 20th Century Collection of the Works of Its Best Playwrights, compiled with an introduction by Lindsay Patterson

Anthology of the Afro-American in the Theater

The Afro-American in Music and Art

Introduction to Black Literature in America

Lindsay had been an assistant professor of English (ret) at Queens College; adjunct professor of Afro-American & Caribbean Literature at Hunter and also taught at The College of New Rochelle and The Frederick Douglass Creative Arts Center. Early in his career, he worked as assistant to Langston Hughes and to Mrs. Countee Cullen. He also guest lectured at Columbia, Kent State, Iowa University, Penn State, University of Connecticut, Medgar Evers College, Clark University, 100 Black Women, among many more.

Among the publications for which Lindsay wrote are: