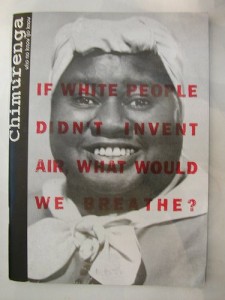 A fascinating and essential global resource of both past and present, reminding me that as the world gets smaller, it just keeps getting bigger. The following is from the Chimurenga Library site:

Curated by the editors and contributors of Chimurenga Magazine, the Chimurenga Library is an online archiving project that profiles independent pan African paper periodicals from around the world. It focuses on cultural and literary magazines, both living and extinct, which have been influential platforms for dissent and which have broadened the scope for print publishing on art, new writing and ideas in and about Africa.

The aim of the Chimurenga Library is not to produce a comprehensive bibliography of periodicals published in Africa; our approach is purely subjective. These are simply objects we read and admire, and which have in one form or another, influenced publishing and editorial choices at Chimurenga.

Some of these periodicals are deep in the postcolonial canon, others smaller and obscure, virtual even. All these projects built on the work of Drum, Presence Africaine, Transition, Black Orpheus and so on but are also alternatives to those monuments. It’s a sort of archipelago of counter-culture platforms that impacted on our concept of the paper-periodical, the publishable even.

The Chimurenga Library invites writers, readers and artists to share their personal experiences and perceptions of these and other periodicals through texts, films and multimedia works. Visitors to the Chimurenga Library can join the conversation but adding comments and updating information.

The Chimurenga Library is supported by Lettera27 and Pro-Helvetia and is part of the WikiAfrica Literature project.