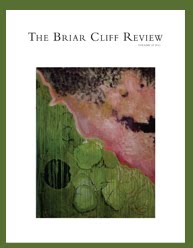 From Tricia Currans-Sheehan’s Editor’s Note to the 2011 issue of The Briar Cliff Review:

In November I went to Beijing to visit my daughter who was teaching English there. What struck me was the silence about Liu Xiaobo, who had just been awarded the Nobel Peace Prize. There was a disconnect. Here I was in this city of 18 million, near a shopping mall, which was putting up Christmas decorations, selling KFC, Big Macs, and Gucci bags and yet the people didn’t know what was happening in their own country or if they knew they couldn’t talk about it. I wondered how long those Gucci bags would keep them satisfied.

While in Beijing my daughter couldn’t blog, connect to Facebook, YouTube or Twitter and only had access to a censored Google. In The New York Times on January 23, 2011, Nicholas Kristof wrote, “…the Chinese cyberspace remains a proletarian dictatorship. In November the government sent a young woman, Cheng Jianping to labor camp for a year for posting a single mocking sentence.”

The connection between freedom of speech and the press and my job as editor of The Briar Cliff Review was so clear. As editor I read hundreds of manuscripts that cover all topics and issues. If I lived in China, there wouldn’t be a magazine like this.