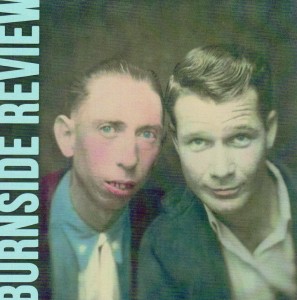 The twelfth issue of Burnside Review, admits Editor Sid Miller, “marks a departure for the journal,” but this isn’t bad news. “It still feels like a Burnside Review,” Miller writes. “My hope is that it reads like one too.”

So what’s the change? Previous Poetry Editor Bill Bogart transferred to work the new book department, and John Pursley III stepped into the role. “John came into the mix because I like and respect his work,” Miller says. “I suppose John rooted for poems that Bill would not have. I suppose Bill would have rooted for others.” Additionally, this is the first issue with Adam O’Connor Rodriguez as fiction editor. “He too shares our sensibility and has made a big impact on the issue,” Miller says. And in the end, Miller thanks everyone for their hard work, claiming that they are the ones “who make this thing work.”