Rebecca Makkai has won the $1000 Lawrence Foundation Prize for 2012. The prize is awarded annually by the Editorial Board of MQR to the author of the best short story published that year in the journal. Makkai’s story “Cross” appeared in the Summer 2012 issue.

Angie Estes has won the 2012 Laurence Goldstein Poetry Prize, which is awarded annually to the author of the best poem or group of poems appearing that year in the Michigan Quarterly Review. Her poems “Le Plaisir” and “Item:” appeared in the Fall 2012 issue.

Margaret Reges is the fourth recipient of the new Page Davidson Clayton Prize for Emerging Poets, which is awarded annually to the best poet appearing in MQR who has not yet published a book. The award, which is determined by the MQR editors, is in the amount of $500. 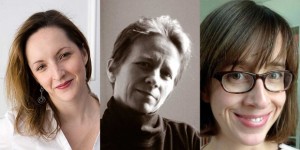