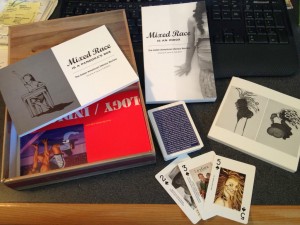 The Asian American Literary Review‘s latest issue is more than just a magazine, it’s a package, it’s a box, literally. Packaged in a box titled “Mixed Race in a Box” are a deck of cards (the back featuring quoted excerpts and the face side, art), a poster, and three bound books: “Mixed Race is a Black Box,” “Mixed Race is an Inbox,” and “Mixed Race is a Pandora’s Box.” Certainly eye-catching, it’s an important issue.

As part of the Mixed Race Initiative, this special issue on mixed race “is not simply a reexamination of race or a survey of mixed voices, important as both are,” say the editors of AALR. “We envision our role as that of provocateur–inspiring new conversations and cross-pollinations, pushing into new corners. All contributions to the issue are collaborative, ‘mixed’ in nature, bringing together folks across racial and ethnic boundaries, across disciplines, genres, regions, and generations. We solicited work from artists and writers, historians and activists, race scholars and filmmakers, teachers and students, among others. The idea is a network of original projects that not only map out multiracialism past and present but also break new ground”