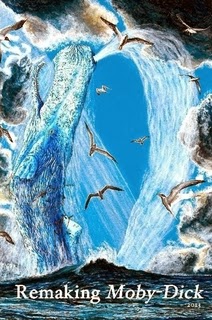 “The Re-Making Moby-Dick project is an international multimodal storytelling performance instigated and enacted during 2013 to 2018. Poets, writers, artists, schoolchildren, scholars, dancers, curators, and sailors are invited to engage the project and participate via the means most natural to their expressive practice. The 135 chapters, along with the extracts, inscription, epigraph, and epilogue, of Herman Melville’s 1851 novel serve as prompts for responsive work created in multiple forms, recorded in digital video and exhibited online.”

Curator Trish Harris and Project Director Lissa Holloway-Attaway have completed the compilation and a participatory video screening that took place at the the Blekinge Museum in Karlskrona, Sweden during the Mixing Realities Digital Performance Festival in May 2013: “The festival foregrounded mixed reality works presented by scholars, curators, and International artists working across media (in sound, video, augmented reality, digital and live performance, dance).”  The YouTube channel for the videos is still available, as well as this compilation of the 24 hour MobyReading Marathon.

Trish and Lissa have also repurposed and re-contextualized the project artifacts, offering yet another “text” published online and in print form that can be shared with a wider audience, along with the original work from the festival, as a further extension of the project. The online version includes QR codes for audio/video content.

It doesn’t stop there – Trish and Lissa are collecting and curating new video so to screen a more-complete Remaking Moby in both Europe and the U.S. in 2014.

Although submissions are now closed, you can still participate by responding to “specific to separate chapters or passages in Moby-Dick or critically interpret some aspect of the novel, extending the meaning and significance of Moby-Dick and reflecting on its continued relevance. The full text of Moby-Dick is available at Project Gutenberg. Chapter synopses are available at Novel Guide.”