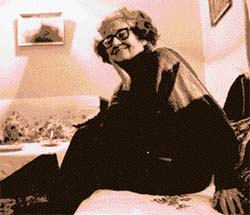 “Qurratulain Hyder, one of the most celebrated of Urdu fiction writers, died on August 21, 2007 near New Delhi, India after a protracted lung illness. She has been buried in the Jamia Millia Islamia cemetery, New Delhi. She was the author of some 12 novels and novellas and four collections of short stories, as well as numerous translations of classics. Aag Ka Darya, her magnum opus, is a landmark novel that explores the vast sweep of time and history. It tells a story that moves from the fourth century BC to the post-Independence period in India and Pakistan, pausing at the many crucial epochs of history. The novel was translated into English by the author and published by New Directions as River of Fire. Hyder was also the recipient of two civilian awards from the Indian government, Padma Shri and Padma Bhushan.”