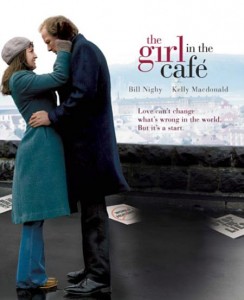 Mitchell Jarosz, my esteemed colleague who has taught film studies for longer than he will disclose, was asked: “If you could recommend just one film for someone to watch, just one, what would it be?”

His reply: The Girl in the Cafe

This is a quietly and surprisingly incredible film. Starring Bill Nighy and Kelly Macdonald (one of my favs from No Country for Old Men; Nanny McPhee; Gosford Park)

From the IMDB entry: “A May-December comedy becomes a political drama. Lawrence, a spindly, self-effacing civil servant, is a senior researcher for the Chancellor of the Exchequer, preparing for a G-8 summit that will determine the scope of the world’s effort to reduce extreme poverty. In a crowded caf