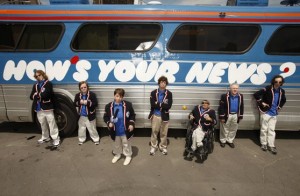 MTV’s latest series How’s Your News first began over ten years ago at a summer camp for adults with disabilities in Massachusetts. The current series grew out of the 1999 documentary directed by author Arthur Bradford (Dogwalker) and produced by South Park’s Trey Parker and Matt Stone. In the How’s Your News? film, Harrington, Bird, Perry, Costello, and Ronnie Simonsen (who’s currently battling leukemia) — all of whom attend Camp Jabberwocky, a Martha’s Vineyard camp for the disabled where Bradford is a counselor — pile into a tour bus and head west.

Along the way from New Hampshire to California, the group conduct a string of man-on-the-street interviews, and their conversations offer a funny and revealing look at how the disabled perceive and are perceived. The TV show follows the same general pattern, but it ups the star quotient somewhat, filming the HYN reporters as they interact with celebs like Sarah Silverman, Ben Affleck, and Amy Sedaris. (The Boston Phoenix)

Episodes from the series can be viewed in full on MTV’s website.

Erica J has her own to say on Disability Nation: Why I Really Didn’t Like “How’s Your News?”