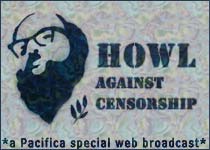 “Fifty years ago, on October 3, Judge Clayton Horn ruled that Allen Ginsberg’s great epic Beat-era poem HOWL was not obscene but instead, a work of literary and social merit. This ruling allowed for the publication of HOWL and exonerated the poet Lawrence Ferlinghetti, who faced jail time and a fine 50 years ago for publishing HOWL.

“Fifty years later, with draconian FCC fines for language infractions, you still can’t hear HOWL on the radio. That’s something to howl about. This October, Pacifica Radio Network released a commemoration of Judge Horn’s ruling on behalf of free speech, with a recording of the poet Allen Ginsberg, himself, reading the unadulterated HOWL.”