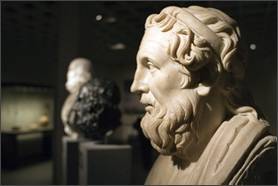 The Antikenmuseum in Basel, Switzerland is currently housing an exhibit highlighting “Homer’s impact on art and culture.” In addition to a nine-meter-tall replica of the Trojan horse, a few installments noted in Hanns Neuerbourg’s AP article:

“On view are magnificent Greek and Roman amphorae and vases depicting dramatic scenes of Homer’s two epics…Coins, statuettes, fragments of text excerpts on Egyptian papyrus and other artifacts on view also stress the dominant effect of Homer’s epics on Western culture since antiquity.

“The paintings on display make up only a small fraction of the vast imagery influenced by the ancient poetry. They range from copies of Roman frescoes to canvases by German pop artist Sigmar Polke and by Cy Twombly, a key figure in American abstract expressionism. The catalogue lists many others from Rembrandt to Picasso.

“In a special room, visitors can see a 2006 video installation by American filmmaker Peter Rose, titled Odysseus on Ithaca. The 2004 movie Troy, starring Brad Pitt and Peter O’Toole, is loosely based on Homer’s epics.”

Read the full article here, and visit the museum’s site dedicated to the Homer Exhibit.