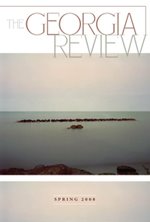 The Georgia Review, the University of Georgia’s nationally renowned quarterly journal of arts and letters, earned seven honors, including four golds, at the Magazine Association of the Southeast’s 2008 GAMMA Awards. Chief among the wins was the General Excellence award for publications with less than one million dollars in revenue.

Other gold awards for UGA’s standout publication were as follows: Best Feature, for “‘The Commerce Between Us’: Correspondence from the Archives, 1977-2000 (Spring 2007 issue); Best Profile, for “Annabel Before the War: Only What I See” by Joy Passanante (Summer 2007); and Best Photography, for “3-D” by Thomas Allen (Spring 2007). “Pursuing the Great Bad Novelist” (Fall 2007), the first-ever publication by Laura Sewell Matter, earned a silver award in the Essays category.