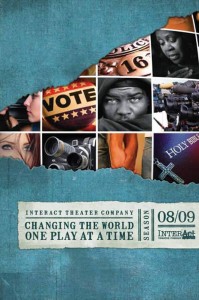 Submissions
Produced by InterAct Theatre Company in Philadelphia, Writing Aloud is a reading series that presents contemporary short fiction read on stage by professional actors. Writers featured in the series are from Pennsylvania and the greater Philadelphia area, or have a strong Philadelphia connection. Selected stories are read before a live audience at InterAct Theatre.

Internships/Volunteer
InterAct offers a variety of internships both during the summer and during the academic year, covering all areas of production, development, and administration. All internships at InterAct have a modest component of general company work, including but not limited to helping with mailings, general office work, and phone answering. In addition, there are several ways to get involved with the company as a volunteer.