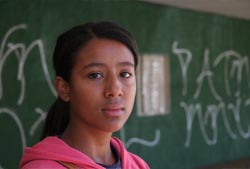 WIDE ANGLE was created in 2001 as a response to the lack of in-depth international news coverage in the United States. Six years later, WIDE ANGLE is the only program exclusively dedicated to international current affairs documentaries. For each broadcast, producers and journalists from around the globe report on an event, issue or trend through the eyes of the people who are living it day to day. In its first six seasons, WIDE ANGLE traveled to more than 50 countries to explore the forces that are shaping the world today, presenting global stories on a human scale and offering Americans uncommon and invaluable insight into today’s interconnected world.

WIDE ANGLE is anchored by former CNN International, ITN and BBC journalist Daljit Dhaliwal. Dhaliwal introduces the featured documentary by putting it in the context of the news of the day, and follows up with a hard-hitting one-on-one interview with a foreign policy expert, administration official, legislative leader, author or journalist who provides context and critical perspective on how global issues connect to American concerns and U.S. foreign policy.

WIDE ANGLE is a production of WNET/Thirteen and airs Tuesdays from July through September at 9 p.m. on most PBS stations nationwide. Check our TV Schedule to find out when WIDE ANGLE is broadcasting in your area.