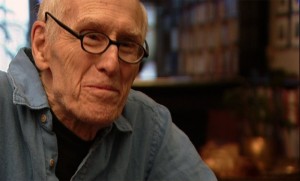 In its heyday during the 1960s, Grove Press was famous for publishing books nobody else would touch. The Grove list included writers like Samuel Beckett, Jean Genet, William S. Burroughs, Che Guevara and Malcolm X, and the books, with their distinctive black-and-white covers, were reliably ahead of their time and often fascinated by sex.

On Nov. 19 Mr. Rosset will receive a lifetime achievement award from the National Book Foundation in honor of his many contributions to American publishing, especially his groundbreaking legal battles to print uncensored versions of “Lady Chatterley’s Lover” and Henry Miller’s “Tropic of Cancer.” He is also the subject of “Obscene,” a documentary by Neil Ortenberg and Daniel O’Connor, which opens on Friday at Cinema Village. [read the rest here]