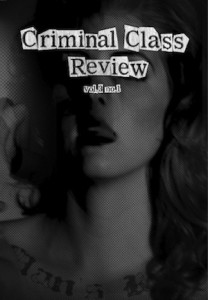 The newest issue of Criminal Class Review (v3n1) is devoted to fiction noir. The independent publication self-described as “Literary Scum,” initially set out to publish “hard luck tales that went unheard,” according to editor-in-chief Kevin Whiteley. “Our stories and poems seek to transcend the gap between song and story. We are interested in where the ‘hard luck’ songs originated, and the tales from the street which spurned them. Punk rockers, Hooligans, outlaws and the like…C.C.P. is not a shoulder to cry on, a place for broken hearts, or an album for family stories rather a fictionalized confession booth for felons, scumbags, and psychos. We don’t take anything less than blood, violence, and abusive aspects of life.”