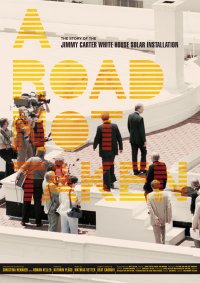 A Road Not Taken is a book/DVD project by two Swiss artists and film makers, Christina Hemauer and Roman Keller, about the story of the Jimmy Carter White House Solar Installation.

You may not remember this but in 1979, President Jimmy Carter installed solar panels on the roof of the White House West Wing.

The panels, which were used to heat water for the staff eating area, were a symbol of a new solar strategy that Carter had said was going to “move our Nation toward true energy security and abundant, readily available, energy supplies.”

But in 1986, President Ronald Reagan removed the solar panels while the White House roof was being repaired. They were never reinstalled.

In 1991, the panels were retrieved from government storage and brought to the environmentally-minded Unity College about an hour southeast of Bangor, Maine. There, with help of Academy Award winning actress Glenn Close, the panels were refurbished and used to heat water in the cafeteria up until 2005. They are still there, although they no longer function.

Swiss directors Christina Hemauer and Roman Keller follow the route the panels took, using them as a backdrop to explore American oil dependency and the lack of political will to pursue alternative energy sources.

In the movie A Road Not Taken, the filmmakers took two solar panels from Unity, placed them in the back of two students’ 1990 Dodge Ram pick-up truck (which had been retrofitted to run on vegetable oil) and delivered one of them to the Jimmy Carter Library & Museum in Atlanta and the other to the National Museum of American History in Washington.

In 1979, Carter warned, “a generation from now, this solar heater can either be a curiosity, a museum piece, an example of a road not taken, or it can be just a small part of one of the greatest and most exciting adventures ever undertaken by the American people – harnessing the power of the sun to enrich our lives as we move away from our crippling dependence on foreign oil.”

It turns out Carter’s warning was at least partially correct: two of his solar panels are museum pieces now.