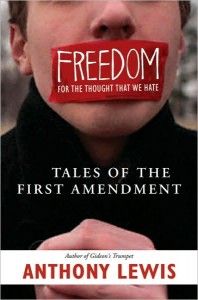 Fourteen Little Words
Anthony Lewis, Freedom for the Thought That We Hate: A Biography of the First Amendment
Reviewed by Victor Navasky
The Nation
February 21, 2008

When I was a first-year student at the Yale Law School in 1956, I was deeply impressed when my torts professor, Fleming James Jr., to underline his point that in the old days one could be imprisoned for seditious libel (even if what one wrote was the truth), quoted I-don’t-know-who, saying:

As Anthony Lewis makes clear in his elegant new book, Freedom for the Thought That We Hate: A Biography of the First Amendment, those days are gone forever. Although his approach is not legalistic, he thoroughly discusses the great libel cases, like Near v. Minnesota, which in 1925 established the principle that the First Amendment protects the press from prior governmental restraints on publication, and New York Times v. Sullivan, which in 1964 extended the principle of First Amendment protection to include subsequent-to-publication punishment (even if what one wrote was false–unless there was reckless disregard for the truth).

Read the rest on The Nation.