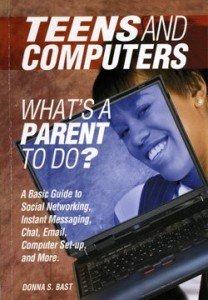 Given my interest in technology and education, I couldn’t resist getting a copy of this book, Teens and Computers: What’s a Parent to Do? A Basic Guide to Social Networking, Instant Messaging, Chat, Email, Computer Set-up and More. I’m a sucker for anything that touts “and more.” Of course, my real agenda in getting this book was to see just how teens were treated. I’ve listened to numerous speakers and read countless efforts by authors to help parents get “in tune” with their teen, and most come off as “us vs. them” masked behind a lot of ageist humor, which only serves to further divide the parent/teen relationship.

Let me further disclaim – I have never raised a teenager. But I work with troubled teens, and I know a lot about what parents do to screw kids up. Donna S. Bast, the author of this book, will not allow that to happen with what she has written here.

Trying to learn hip new technology, I’ve also read several ______ for Dummies books (like for Second Life – I’m STILL not off Welcome Island – Second Life Guantanamo…). The problem with those books: They’re too stupid. Bast’s approach is directed to parents who have some clue about what is out there, and perhaps even use some of the technologies themselves, but don’t quite get how kids use the technologies like oxygen. Bast is able to tap into the realm of how critical these technologies are to teens and their social identities (HUGELY important to teens), and how parents can better work with their teens and technology instead of against both.

The book starts with “What are my Teenagers Doing on the Computer?” and covers IM/Text, chat, blogs, email [old school for teens now!], MySpace, Facebook, Xanga and video portals. Every chapter gives the basics of the technology, its attraction for teens, how new users can access it, what cautions should be heeded, and how to talk with your teen about these concerns.

It’s not until the second part of the book that Bast gets into “Limits for Computer Usage.” But these have been discussed throughout, not so much as taking total control, but how to negotiate responsible usage with your teen. Still, her chapters on “Should I Control…” and “What are the Rules and Consequences…” provide insightful and patiently scripted suggestions. What I think gives Bast the greatest edge in this writing is that she is a computer geek, through and through (her business is Miz Fix-IT Tech). She likes technology and doesn’t want to see it get a bad rap in this parent/teen struggle.

But, the absolute best part of Bast’s book, which I have NEVER seen discussed in any other “how to deal with your teen and technology” forum is the chapter “What Should I Know about Plagiarism and Copyright?” Finally! Thank you Bast! This chapter puts some responsibility on the parents, who are working with their children on homework, to be sure that what their kids write is authentic and not “copy and paste” from the web. She also covers downloading and pirating of music and software. As an educator, this chapter alone (and the appendix on plagiarism) is one I wish every parent of a teen would read and put to use in working with their young scholars.

The rest of the book is devoted to basic computer and Internet education, including computer terms, useful sites, buying a laptop, MORE on plagiarism, and the “dark side” of the Internet. Rather than starting with this material, I like that Bast ends with it. This allows those who need more “basics” to get it, without those who don’t need it feeling as though the book isn’t for them when they open up to the first couple of chapters. Very well planned in terms of delivery of content.

The only drawback to this book that I can see is that it is self-published (available via Amazon and Borders). The double-edged sword. Sure, it’s out there, and I imagine Bast sells them at talks and trainings, but this book would better serve a much wider audience of readers – parents and teachers alike – that could be reached with, say, an academic publisher’s marketing plan. Hello? Scholastic?