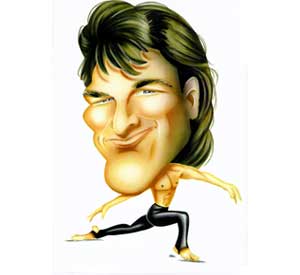 To celebrate the life and sometimes brilliantly bizarre work of Patrick Swayze, Barrelhouse has assembled all the responses to The Swayze Question: “For the past five years, Barrelhouse has ended every interview with the same question: what is your favorite Patrick Swayze movie? We’ve asked The Swayze Question, quite literally, to anybody who would talk to us, everyone from Emmylou Harris to Ian MacKaye to Malcolm Gladwell to the Hold Steady.

“What’s your favorite Patrick Swayze movie? Is it a low-budget trucking action thriller? A big budget romantic escape with class warfare undertones? An indie drama about a disturbed kid who sees visions of a giant bunny rabbit? The one where he’s a doctor in India, who is kind of bathed in white light the entire time? The one where he’s a high school jock fighting the communists? See, that’s the thing about the Swayze Question: whatever your answer, it reveals a lot more about you than it does about Patrick Swayze.

“He’s been kind of our patron saint, so this seemed like the best possible memorial.” -Dave Housley