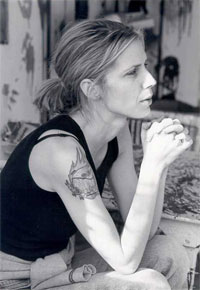 Authors with Tattoos
Excerpted from AbeBooks

Authors just don’t spring to mind as the most likely people to have tattoos. But authors are showing their tattoos in publicity shots, they are arriving at award ceremonies with tattoos clearly visible, and they are loud and proud about the words and images that adorn their bodies.

Get that stereotyped picture of tattooed sailors and truck drivers out of your head. Tattoos are mainstream and have been for several decades now, plus the literary world actually has a long tradition of wearing tattoos and also writing about them.

Herman Melville wrote with humour about South Pacific tattooists and the tattooed in his 1846 novel Typee: A Peep at Polynesian Life and George Orwell, who rarely conformed with the British establishment, had blue spots tattooed on to his knuckles. In 1951, Ray Bradbury published a book of short stories called The Illustrated Man – all the stories were linked together by a tattooed vagrant. Each one of the character’s tattoos had a story to tell. America poet and writer Dorothy Parker had a star on her elbow. Sylvia Plath wrote about The Fifteen Dollar Eagle, while Franz Kafka wrote about a nightmarish tattoo machine in his short story In The Penal Colony. The list goes on.

In fact, the book Dorothy Parker’s Elbow – edited by the tattooed duo of Kim Addonizio and Cheryl Dumesnil – reveals how writers have addressed the issues surrounding the needle and the ink including the actual process, the tattooists and their work, the reaction of friends and family to the artwork, mirrors, meanings, and even the tattoos forced upon prisoners in German concentration camps…[read the rest at AbeBooks.com]