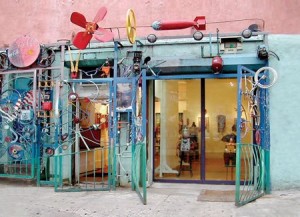 Today’s popular culture has created a climate where there is scant recognition or respect for female modesty or achievement that isn’t coupled with sex appeal. Being “sexy” is the ultimate accolade, trumping intelligence, character and all other accomplishments by a woman during the various stages of her life.

Popular culture has created a climate in which women are valued more for their appearance than for their contributions to society, forcing women of all ages to become willing, active and conscious participants in a tawdry, tarty, and very cartoon-like version of female sexuality.

“WOMAN” FusionArts Museum’s first group exhibit by female artists examines this new female imperative with the assistance of the Roman poet Ovid who said: “What one beholds of a woman is the least part of her,” reminding us that women are more than their Manolo Blahnik pumps.

Gallery hours are: Sundays, Tuesdays – Fridays from 12 Noon to 6 PM.