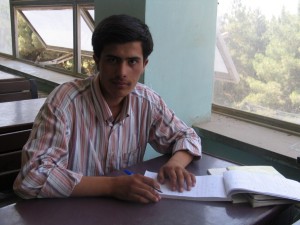 This was posted on the Reporters Without Borders web site:

“Sayed Perwiz Kambakhsh, a 23-year-old journalist, was arrested in Mazar-i-Sharif, the capital of the northern province of Balkh, on 27 October 2007 on charges of blasphemy and ‘disseminating defamatory comments about Islam.’ Under repeated pressure from the Council of Mullahs and local officials, a Mazar-i-Sharif court sentenced him to death on 22 January 2008 at the end of a trial held behind closed doors in which he was not defended by a lawyer.”

The short version of the story is that Kambakhsh downloaded an article off the internet that discussed what the Koran says about women, and distributed a few printed copies. For this “crime” he has been sentenced to death. In another article in The Independent, Jean Mackenzie of the Institute for War and Peace Reporting is quoted saying, “We feel very strongly that this is designed to put pressure on Pervez’s brother, Yaqub, who has done some of the hardest-hitting pieces outlining abuses by some very powerful commanders.”

Please consider joining the international campaign to stop this sentence from being carried out.

Link to the full story and link to petition on the Reporters Without
Borders site is here.

A petition launched by The Independent (UK Publication) can be found
here.

Full story in The Independent is here.

Many thanks for your attention to this. Please pass it on.