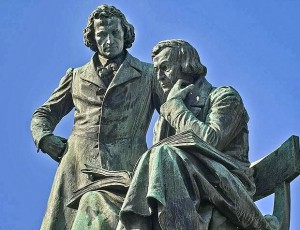 September 20 of this year marks 150 years since the death of Jacob Grimm, who died four years after his younger brother Wilhelm. Morgan Mies in his post The Storytellers (The Smart Set, Drexel University), takes a look at our fascination, and sometimes disgust, with these brothers and their story collecting. She makes this comment after acknowledging accusations that Grimm’s were “early forerunners of a German nationalism that eventually turned into Nazisim”:

Whether or not those accusations are justified, the Brothers Grimm saw folktales and legends as absolutely essential material for the formation of any kind of cultural identity, good or bad, fascist or anti-fascist. The Brothers Grimm believed that folktales are fundamental. That’s because folktales and legends express root fears, anxieties, wishes, passions, desires, and regrets. Reading the folktales of a specific people is like reading an individual’s private diary. It is not that the diary is necessarily truer than, say, the person’s public correspondence. But the private diary is certainly more raw and less filtered. Jacob and Wilhelm Grimm felt that the German people would wake up to themselves if given the opportunity to read their own collective diary.