The Red Ear Blows Its Nose: Poems for Children and Others
Poetry by Robert Schechter
Illustrations by S. Federico
Word Galaxy Press, April 2023

If you’ve got any “littles” in your life, The Red Ear Blows Its Nose is the perfect gift book to preorder for next year’s National Poetry Month. Published by Word Galaxy Press, an imprint of the well-respected Able Muse Press, The Red Ear Blows Its Nose dishes out hilarity, wit, wordplay, and wisdom in a playfully illustrated collection of poems “for children and others.” It considers thought, identity and what it means to be a person, nature and the seasons, and includes assorted creatures, such as a horse who says “Moo,” a “Dear Earthling” letter from an invading alien, bees, ants, birds, and elephants. Several poems focus on the senses and the brain, including this thoughtful short work:

This debut collection from Robert Schechter is complemented by S. Federico’s illustrations, which add to the possible interpretations of the works. Robert Schechter’s award-winning poetry for children has appeared in Highlights for Children, Cricket, Spider, Ladybug, the Caterpillar, Blast Off, Countdown, Orbit, and more than a dozen anthologies published by Bloomsbury, National Geographic, Macmillan, Houghton Mifflin Harcourt, the Emma Press, and Little, Brown Books for Young Readers. 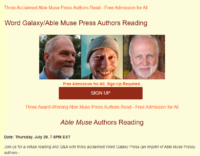 Enjoy a free virtual reading event from Word Galaxy Press, an imprint of Able Muse Press. On Thursday, July 29 from 7-8 PM EST, join David Alpaugh, James Kochalka, Sydney Lea, and host John Beaton. There will also be a Q&A session. While signing up is free, you do have to register to attend. The reading and Q&A will be done via Zoom.

These three writers had books published by Word Galaxy Press in 2020: Spooky Action at a Distance: Poems (David Alpaugh) and The Exquisite Triumph of Wormboy: An Illustrated Epic (James Kochalka and Sydney Lea).

Grab your copies of these titles today and don’t forget to register for the reading!