“Breaking the Silence” has been the long-time effort of The National Alliance on Mental Health, and now a new outlet sharing this mission is Cathartic Youth Literary Magazine, an online publication featuring contributions from youth 12-22 years old, and particularly works covering mental health conditions and the teenage experience.

Founder and Editor-in-Chief Anna Kiesewetter [pictured] shares the publication’s genesis, “The word ‘cathartic’ has always perfectly encapsulated what writing is to me. I realized that some of the most powerful writing I’ve read and created was used for catharsis – to deal with emotions, to make sense of life, to put trauma into words. I’m a firm believer in the power of vulnerability, and I’ve realized that writing has helped me with a lot of my own mental health struggles. Writing has made me more mindful of what goes on within my head and provides me with an outlet that I can’t really get anywhere else; I thus hoped it might provide similar benefits for other young people. Mental health is also a subject that has been almost taboo to discuss in the past, and even now it still carries quite a bit of stigma. Especially during this pandemic, which seems to be exacerbating existing conditions. Youth mental health is such a prevalent and important issue, yet one that isn’t often talked about. I felt like this magazine could serve a threefold purpose: to open up discussion about mental health, to encourage mindfulness and writing for catharsis, and to provide a platform for young writers as a sort of steppingstone to larger publications.” 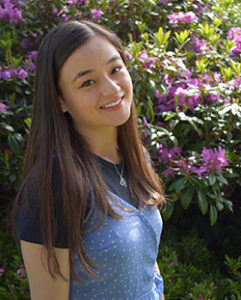 Anna’s experience speaks to her commitment to developing as a writer and encouraging others. A seventeen-year-old high school senior from Issaquah, Washington, Anna currently focuses her writing on short stories. She was a 2020 American Voices Award nominee for the West region of the Scholastic Writing Awards, and her work is published in the Blue Marble Review, the Trouvaille Review, Hypernova Lit, the Heritage Review, and elsewhere. She also works as an editor for Polyphony Lit Magazine and writes mental health articles for the Helyx Initiative, a youth bioinformatics group.

Cathartic Youth accepts submissions on a rolling basis and updates the online magazine with new works daily or weekly depending on the number and quality of submissions. The publication welcomes any form of writing – poetry, prose, creative nonfiction, opinion articles, and cross-genre works – “with a particular emphasis on writing for catharsis as a way to break the stigma around mental health discussion.”

“For readers, our magazine is filled with both poignant and light-hearted works,” Anna says, “with topics ranging from racial trauma and eating disorders to love and family. Our international authors have diverse viewpoints, from Cuba to the UAE to the Philippines, reflected in their unique poetry and prose. Reading through the pieces we publish always fills me with hope and gratitude. There’s so much beauty and rawness within each young voice. Reading their stories feels like glimpsing a light amidst the fog, a reminder that none of us who struggle are alone, that there is strength in vulnerability.”

For writers, there is a thorough editorial and feedback process. “Once we receive submissions,” Anna explains, “they are forwarded to an editor, who then provides specific and general feedback on both strengths and weaknesses of the piece. That editor sends this feedback, as well as their recommendation for acceptance or rejection, to the Editor-in-Chief. The Editor-in-Chief reads through the piece, edits the feedback if necessary, adds on any comments she has, then makes the final decision and emails the author back accordingly (with the feedback). Authors have the choice to submit revisions to their work, which is then finally published to the online magazine (if accepted) or forwarded to a new editor (if initially rejected). This is all typically done within a week of receiving the submission, though it may take longer if revisions are submitted.”

Starting a literary publication comes with its own challenges and rewards. “The biggest challenge, for me,” Anna says, “was starting the magazine up with no real experience or partners. I think it was partially my own insecurity that made me scared to ask anyone for help, so before I launched the magazine, I had no idea how successful (or unsuccessful) it would be, as it began as really a one-woman project. Even after building the website and preparing the email account, social media, and other logistics, it took me a few weeks to build up the courage to actually begin promoting and opening the magazine for submissions. I didn’t expect to get more than a few submissions per month; thus I was incredibly surprised when we received fifteen submissions in the first week, a number which steadily grew. What really floored me and left me so humbled was the outpouring of support I received from both friends and total strangers after launching. There were people I’d never met before opening up about their own mental health struggles, sharing the magazine, filling out editor applications, and thanking me for creating this platform. Now, we have international staff and contributors, from sixteen U.S. states and seventeen countries worldwide, which all immensely surpassed my humble expectations. To have such a worldwide impact on young writers makes all the stress and planning feel so, so worth it.”

The future of Cathartic Youth, according to Anna, is to “keep talking about mental health and sharing the voices of young writers! We’ve recently started a sort of infographic campaign on Instagram [@catharticlitmagazine] with educational posts discussing different mental health topics. We’d like to expand this further to increase their circulation, as well as keep publishing the powerful mental health writing of young people.”