In the Editor’s Welcome to the Spring 2022 issue of Aji Magazine online, Erin O’Neill Armendarez writes, “Among the pages of this issue, you will find writers and artists rushing headlong into what frightens us, diving deep into the mud and the grime to rise again triumphant, if only for a moment. We are honored to be featuring Keith Hamilton Cobb and Mark Hurtubise in this issue, both of whom had the courage to address injustice openly. Likewise, we are honored to be offering readers and viewers an impressive slate of photography, art, poetry, essay, and fiction, exploring the human condition, imagining beyond ourselves into the Other, the unknown.”

Submissions for the fall 2022 issue are open until filled, with no submissions being accepted after November 1. 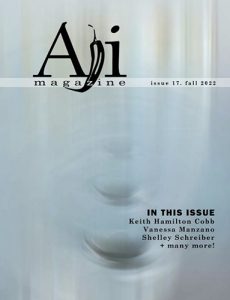