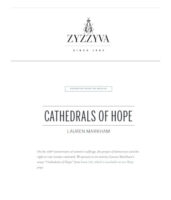 In the 35th-anniversary edition of the San Francisco-based literary magazine ZYZZYVA, Lauren Markham’s essay, “Cathedrals of Hope,” reminisces on the women’s suffrage movement. This piece is timely as 2020 America marked the centennial anniversary of women gaining the right to vote. Markham not only reflects on the women who sacrificed their freedom and endured abuse so that women can vote today but also discusses populations forgotten in the 1920s: men and women of color.

Markham weaves her own narrative into the larger historical picture, describing how her first-time voting was marked with devastation when George Bush Jr. won—again. Markham takes a unique look at where we as Americans are in regard to democracy while commentating on where we came from. Markham writes, “How easy human beings can forget the people who came before us, and the debts we owe.”

Reviewer bio: Holly Vasic is a Graduate Instructor seeking a Master’s in Folklore at Utah State University with an undergrad in Journalism.