The Mississippi River holds a special place in American literature. Mark Twain wrote extensively about it in his memoir, “Life on the Mississippi”: “The Mississippi is well worth reading about. It is not a commonplace river, but on the contrary is in all ways remarkable.” Big Muddy, a literary journal published by the Southeast Missouri State University Press, is as remarkable as the mighty river it is named after. This journal delivers stories, poems, and essays related to the Mississippi River Basin and its bordering ten-state area, but you don’t have to live in this area of the United States to enjoy the writings collected in this issue.

The Mississippi River holds a special place in American literature. Mark Twain wrote extensively about it in his memoir, “Life on the Mississippi”: “The Mississippi is well worth reading about. It is not a commonplace river, but on the contrary is in all ways remarkable.” Big Muddy, a literary journal published by the Southeast Missouri State University Press, is as remarkable as the mighty river it is named after. This journal delivers stories, poems, and essays related to the Mississippi River Basin and its bordering ten-state area, but you don’t have to live in this area of the United States to enjoy the writings collected in this issue.

“The Tattoo Artist’s Confession” by Charles Jensen is a colorful poem with attitude. Jensen loads his writing with rich detail like the tattoo artist in his poem: “What I create my clients keep hidden: / melting daisy unfurled around a thigh or, / on the back, an eagle soaring / high above the scapulae.” Such artwork does not come easily. The clients must endure a certain amount of pain as the ink merges with their skin

Some men whimper, some breathe
heavy, panting, their backs

hairy but for where I’ve shaved
to do my work. I smell their sweat,
vinegar and salt, but it
does not deter my sting.

Those who have been under the needle of a tattoo artist will appreciate the beauty found in this poem. Perhaps someone will even have this tattooed on their back after reading.

Casey Pycior’s short story “The Current” is a coming-of-age story set in the Elk River valley of Southern Missouri. The protagonist is a boy who is beginning to understand that his body is changing. With this change comes the primal urge to mark territory and single out the alpha males of the pack: “At school it was clear who were still boys and who were becoming men.” Masculinity is at the heart of this story. The boy goes on a canoe trip with his father, who tries to teach him how to be a man: “A man’s got to stand up for himself because if he doesn’t, well, then no one else will. You hear me?” The trip begins pleasantly enough, but as they paddle downstream they are hounded by abuse and violence from other people, and the boy sees how flawed his father really is. Their journey reminds me of The Odyssey, but there are no sirens or Cyclops. The monsters the explorers face are all human and challenge the boy’s conceptions on how to be a man. This story is definitely worth reading.

Donna L. Shrum takes us back to the American Civil War in her essay “The Life and Death of the B.P. Cheney.” Here we have a fascinating look at an often overlooked part of the war, which is the birth of the Confederate navy on the Mississippi. That vast river has always been a vital roadway for the United States. The Confederates realized the importance of this river and need to control it if they wanted any chance at winning the war. The Confederacy had no real navy to speak of, and their coastal cities needed several months to produce a single ship: “The obvious quick solution was to steal what they didn’t have.” Shrum weaves an exciting yarn of the people involved in this part of the war and the conflict it created. Archibald Anderson Hunt is the Confederate pirate who hijacks the B.P. Cheney, an armor-plated steamboat that would serve the Confederacy’s needs on the Big Muddy. Hunt sells the Cheney to the Confederacy and is hailed as a hero, but is later accidently killed by one of his own men during a battle. Shrum’s essay is a great read for any history buff.

“Leviathan” by William Jablonsky is a modern day tall tale about a man fighting a giant catfish. The narrator is a mother telling her child the story of how the father disappeared while on a quest to catch an almost mythical catfish. A one-armed man with a can of Schlitz approaches the father while he is fishing one day and tells him about the giant fish. The father is skeptical at first, believing that the one-armed man has had too much to drink. But then he sees it: “There was a mighty splash, like a meteor plummeting into the river. Your father looked again, in time to see the monstrous forked tail breaking the water.” Being the consummate fisherman that he is, the father sets off on his quest to capture this monster fish. He gets more than he bargained for when he finally snags it on his fishing pole as it drags him and his boat on a wild ride down the river. Any sane person would let go at this point, but the father is made of stronger stuff:

You might reasonably ask why, if he were in peril, your father would not just let go of the rod. But he never would. Ever. In another life, had circumstances been kinder to him, he might have been out on the open sea wrestling a marlin or great white up to a gleaming deck. To him this was the same; the fish was his salvation from the clipper plant, home improvement projects, and mind-numbing barbecues with your aunts and uncles.

This story is wildly funny and heartwarming. Such a tale deserves to stand side by side with other American folk tales such as Paul Bunyan and John Henry.

The last poem I would like to mention is Mark Poor’s “Whale Domination,” which can be labeled as strange, yet darkly funny. It is a short poem, only four stanzas long, and it is about a girl who “loved to shoot her gun at fish and some / Times mammals too.” I love Poor’s clever rhyming scheme in the second stanza:

As “Prelude to a Faun” she bade her i-
Pod croon. She walked to sea but stopped at beach
Where families and old folks straggled by,
Then drunk and stoned she cocked her cheek to breech.

But then a whale breeches the surface and uses its fin to knock her into a cage: “girl and gun locked in sin, bounced up and down / While other whales grinned, sang, and watched her drown.” Take from this what you will.

Overall this issue was a lot of fun to read. There are solid poems, stories, and essays that range from the serious and to the absurd, and there’s even a rollicking western packed in here. Like the Mississippi, this journal is well worth reading about.
[www6.semo.edu/universitypress/bigmuddy] 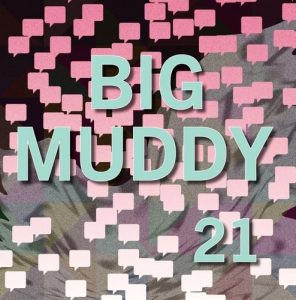 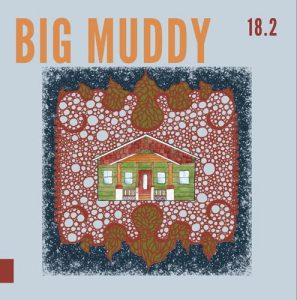 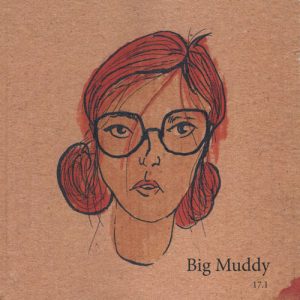