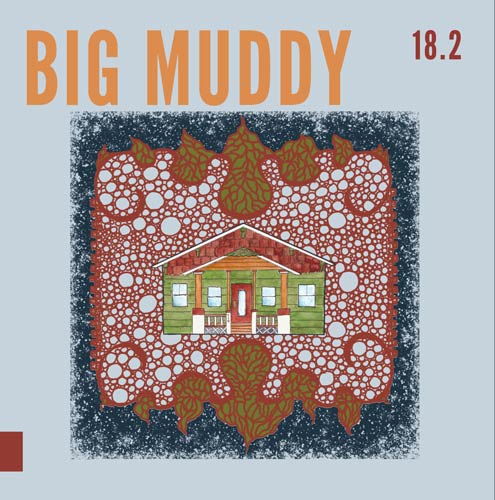 Big Muddy has proven to be one of my most favorite journals to read. The topics of its many stories and poems speak to that downhome, simpler type of life, even if sometimes it may not be a positive image or experience for those involved.

Within its pages, you’ll find fiction, poetry, and essays that really make you think about life and the situations we find ourselves in. Most of the work and topics are directly related to the ten states bordering the Mississippi River, all the way from the U.S./Canada border to the Gulf Coast through Louisiana.

Big Muddy has proven to be one of my most favorite journals to read. The topics of its many stories and poems speak to that downhome, simpler type of life, even if sometimes it may not be a positive image or experience for those involved.

Within its pages, you’ll find fiction, poetry, and essays that really make you think about life and the situations we find ourselves in. Most of the work and topics are directly related to the ten states bordering the Mississippi River, all the way from the U.S./Canada border to the Gulf Coast through Louisiana.

One of my favorite stories here is from John R. Murray, titled “Advice.” This story spoke to me as it may speak to so many others who have visited a small town and thought: maybe I can drop my stressful life in the city, move out here to the country, and make a better life, a simpler life, for my family and it would be good for all of us. Unfortunately, this story shows what “could” or “might” happen, and what you shouldn’t be surprised by: “So everything could go as you want, and you might actually move to the place you dreamed of, to pursue the life you dreamed of.” However, you “should have known that there was no way you could keep the general store” and you should have known that “hindsight is a curse.”

As the author points out, there is a reason why most people don’t live in the country, and if someone thinks that uprooting their family and their life like this to change their scenery on a whim will help, they should probably put a lot of careful thought into it. When my husband and I moved out from a suburban neighborhood to a more rural setting, everyone was so surprised—they had no idea what we’d even do out there. However, for us, this was the right move that we’d put that careful thought into.

Another story like this one that touches on how some people might think “simple” life is simpler, only to realize it’s just as hard and difficult as “urban” life is “DIY Year” by Kathie Jacobson. The main characters chose to move out into the country, raise their own animals for food, and raise that animal to be slaughtered for food for their DIY year. Even as they are preparing to slaughter their hog, a random chance encounter with a bunch of vipers nesting in the wall around the pen makes them realize that this isn’t safe—it was never safe—and this is just too much for the both of them, prompting them to give up their “DIY Year” and get out of there.

I loved the poem from Mike James, “Listening to an Old Friend Talk, On a Pennsylvania Hillside, Late Autumn.” While the poem is a bit about the weather, the landscape, and the wind, it has such a bigger meaning. It is really about how we all age and how “winter” comes for us all at some point. For example, when the poet shares, “middle age and old age, both surprise us / along a dirt path, suddenly, a vast rock pile of years,” reminding readers  of how fast time passes. No matter how many times we may stop and rest and watch “the wind on the hill grass,” we are going to see winter ahead and waiting for us.

Another story I enjoyed in this issue was “Fever” by Ron Riekki. This is a story of an EMT specialist on a call who is used to dealing with difficult situations. However, this call isn’t actually for a human, as expected. It turns out to be for a dog who is suffering with a seizure. The EMT tech refuses to give up on the dog like the owner has chosen to do and has the owner sign the dog over, then rushes to take care of the dog as best as possible.

To be honest, this story really speaks to me because I have a cat with a seizure disorder. Like the EMT, I too have had to cuddle a tiny, furry body and try to tell him soothing words to help him wake up in the safety of my arms. Lines like “It’s still seizing. It’s pressing into me, cuddling into me like it knows it’s going to die” brought me to tears. I also know, like the EMT, that “it’s going to be in my life now. Permanently,” because there is no way I’m going to let that little guy be without me either.

On a more whimsical note, the story “God Complex” by Bradley Babendir shows the lives of two people living in the city near Columbia University. One is a failed student who is now “freelancing” and the other is working at a library. Suddenly, one decides that in a dream, she was told she was “god.” After that, she creates a Bible, or later what she calls a Manifesto, that she spreads around to try to create a following. People in their area who are eager for a sense of spiritual belonging start to take up as her following and before long, her religion becomes her life—leaving her and her boyfriend as an afterthought. Whether it is the assumption of the mantel of “god” or simply finding a job that takes your life, it is easy for issues like this to overtake a relationship and put it on the backburner while “more important” issues take priority.

These are just a few of the interesting stories in the pages of this issue of Big Muddy. There are also many poems and even drawings included, and each one speaks to a different part of life, a different part of who and what we are as humans. I would highly recommend this literary journal – it is an amazing collection of life around the Mississippi, in all its forms.