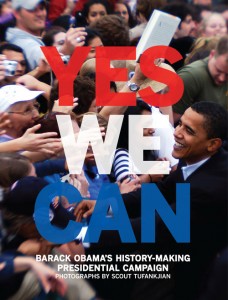 After almost two years of following Barack Obama, Scout Tufankjian’s photographs will be collected in a book: YES WE CAN: Barack Obama’s History Making Campaign.

Scout Tufankjian is a photojournalist based in Brooklyn, New York, with clients including Newsweek, Essence, US News & World Report, Le Monde, Newsday, and The New York Times. She was not employed by or affiliated with the Obama campaign in any manner, shape, or form, but was a journalist covering the campaign.

The website itself has over 500 images from the campaign trail as well as information about ordering the book.