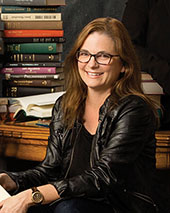 The November-December 2016 issue of World Literature Today is dedicated “cover to cover” to women writers.

Managing Editor Michelle Johnson [pictured] writes in the Editor’s Note: “. . . several months ago [the editors at WLT] decided to dedicate the November 2016 issue exclusively to women writers—and women reviewing women writers. The editorial team briefly considered creating such an issue without comment—as if WLT existed in a utopia of parity where all writers in a literary magazine might just happen to be women. But in 2016, giving women the whole issue is still noteworthy even for a magazine like WLT with a strong track record of publishing women writers.”

The collection opens with Alison Anderson’s “Of Gatekeepers and Bedtime Stories: The Ongoing Struggle to Make Women’s Voices Heard,” part of The Puterbaugh Essay Series. See a full list of contents here.