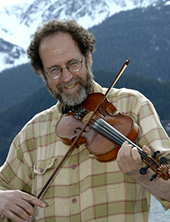 Frustrated with the current policital administration? You protest, rally, write letters, get yourself and others ready to vote…what more can you do? For poet and musician Ken Waldman (aka Alaska’s Fiddling Poet), there’s poetry. Sonnets to be exact, and a lot of them. With two volumes already completed and one more (at least) on the way, Waldman is taking this administration to task – and perhaps salvaging his own sanity as well as that of his readers – responding to the daily fodder by turning it to his muse for poetry.

Like many of us, in a stunned stupor the day after the election, Wednesday, November 9, 2016, Waldman writes that he was “processing Donald Trump’s surprise victory in the 2016 U.S. presidential election, and wrote, ‘You make George W. seem a statesman–your opening trick,’ which I turned into the first line and a half of a sonnet. A week later I wrote two more Donald Trump-inspired sonnets. Between Thanksgiving and Christmas, another 68. That’s 71 sonnets, a full-length collection. 41 were written in the voice of Donald Trump. The rest were addressed to him.” The book’s subtitle – The First 50 Days – speaks to the process many of us went through at the start.

Now in our second year of Trump’s reign, Waldman continues to see us through with Trump Sonnets Volume 2: 33 Commentaries, 33 Dreams. “Half of this sequel’s 66 poems is incisive commentary,” writes Waldman,. “Half, dreams that I imagine Donald Trump might have, and those are in Trump’s voice.”

Both volumes, as well as Waldman’s other books, are available through SPD Distribution or directly from Waldman. Visitors to his website can also view YouTube videos of Waldman reading the poems with a little bit of his iconic fiddling style thrown in.